My own experience is that epiglottis-related obstruction is more common in older adults with sleep apnea, especially in those who have significant obstructive sleep apnea in spite of being relatively thin (making one think they should not have sleep apnea at all).  Based on this observation, I worked with one of our former residents in the USC Caruso Department of Otolaryngolgy–Head & Neck Surgery, Leslie Irvine, MD, to perform some research that examined the potential role of aging in epiglottis-related obstruction. 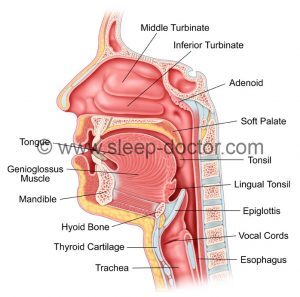 Obstructive sleep apnea is more common with increases in age, reaching a plateau after age 60.  There are probably many factors that can explain this, but these same soft tissue changes likely play a role.  It appears that the epiglottis can play a role in obstructive sleep apnea by being too large, too floppy, or too mobile, meaning that it is not held firmly in a position to keep the airway open.

It is no secret that aging is associated with changes in our skin and other soft tissues.  In short, people develop skin wrinkles and sagging in other areas as we get older because of increased looseness, or laxity, of our our soft tissues.  This occurs because of changes in collagen, elastin, and other fibers within the soft tissues that provide strength and resilience.  However, aging does not affect all soft tissues equally.

0 thoughts on “Does Aging Cause Epiglottis-Related Obstruction in Obstructive Sleep Apnea?”