The nasal septum separates one side of the nose from the other. It is composed of bone, cartilage, and the overlying soft tissues such as the lining of the nose. Septal deviation (positioning of the septum towards one side of the nose or the other; see picture below) or septal spurs (thickening or bowing where the septum’s cartilage and bone meet or at an area where trauma to the nose has fractured the cartilage or bone) can produce blockage of one or both nasal passageways.  Septoplasty is a procedure to treat a deviated septum and improve nasal breathing.

How does a septoplasty improve breathing through the nose?

Septoplasty attempts to straighten the septum and restore its position to the midline to open the nasal airway. Septoplasty is performed by raising the lining off both sides of the nasal septum through an incision inside the nose. At the end of the procedure, the lining of each side is replaced against the septum, and stitches may be placed to help the nasal lining heal back in its original position against the septum. Nasal splints may be placed in the nose as another measure to help with healing. 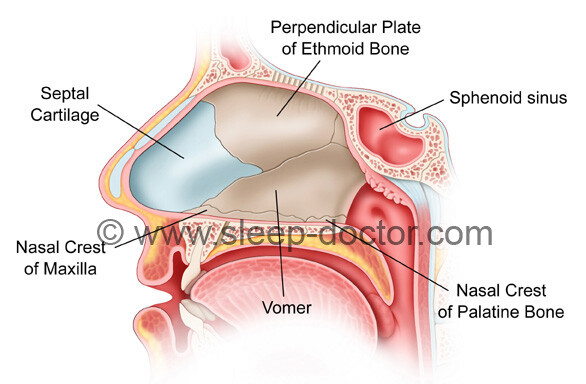 The following video presents a discussion of nasal procedures, including septoplasty:

The nasal septum has an excellent blood supply, and this places patients at risk for bleeding following septoplasty. While many steps are taken to minimize the risk of bleeding, there is a chance that it can occur. A major factor in preventing serious bleeding is to avoid the use of aspirin, NSAIDs (such as ibuprofen, Advil®, Motrin®, naproxen, or Aleve®), vitamin supplements, or herbal medications for at least two weeks before and after surgery. Minor bleeding should be expected, but the amount of bleeding can potentially be significant or life-threatening.

Septoplasty involves raising the lining of the nose off the septum on both sides with replacement of the lining against each other at the end of the procedure. If bleeding occurs after surgery and the blood is trapped underneath the lining, a collection of blood called a hematoma can develop. This can potentially become infected and then lead to a change in the appearance of the nose. The best way to avoid this complication is prevention. By following the postoperative instructions carefully, the risk of this complication is reduced.

As the lining of the nose is raised off both sides of the septum, tears can develop in the lining. Because a deviated septum thins the lining of the of nose in the area of deviation, tears are common. However, if tears develop in matching positions on both sides of the nose, a hole can develop after the septum has healed. This can create problems such as crusting or a whistling sound during breathing, although often no treatment is required. Additional treatment can include placement of plastic to plug the hole or additional procedures.

Change in appearance of the nose

Change in the sense of smell

Any surgery inside the nose can occasionally cause alterations in the sense of smell. Your sense of smell may return, although changes can be permanent.

Numbness of the teeth

The nerves to some of the upper teeth pass through the nose, as the nose is directly above those teeth. These nerves can be damaged during a septoplasty. If numbness of these teeth does occur, the problem typically resolves over the course of weeks. However, this numbness can be permanent.

These problems are usually temporary, but they may be permanent.

There is a chance that septoplasty will not be effective in accomplishing the goals of surgery. Another procedure—either performed on the septum or on another area—may be necessary to provide the desired relief of nasal obstruction.

You should be prescribed narcotic pain medication after septoplasty. Take this medication as you need it for pain control, and try not to let the pain increase until it becomes intolerable before you take the medication. If you prefer to avoid narcotics, you should feel free to use acetaminophen (Tylenol®). Avoid aspirin, NSAIDs (such as ibuprofen, Advil®, Motrin®, naproxen, or Aleve®), vitamin supplements, or herbal medications for at least two weeks because they can increase your risk of bleeding after surgery. Your pain may be significant for the first 7-10 days following surgery, but it should improve markedly by 10 days following surgery. Two things that may reduce the swelling (the underlying cause of the pain) are to sleep with your head elevated (on 3 pillows) for the first 3 days following the procedure and to use ice or something like frozen peas in a bag placed over the bony part (highest area of the nose) of the bridge of your nose. Be careful not to put pressure on the rest of the bridge of your nose, as that will not only be painful but can disrupt the healing process and/or move your septum to one side or the other of the nose.

Your surgeon may decide to place splints inside your nose to help the healing process. The splints are typically held in place with a stitch inside your nose. Although the splints are placed in certain patients to provide the best long-term outcomes, the splints can produce some temporary problems. First, often the splints become coated with dried mucus and/or blood; patients may be unable to breathe through their nose if this happens. The splints themselves or the stitch can cause some discomfort in excess of the typical surgical discomfort. Finally, your nose may also appear wider with the splints in place. All of these are temporary changes that should resolve once the splints and the stitch are removed, usually a week after surgery.

If splints are placed inside your nose, you must take antibiotics until they are removed. This helps prevent what can potentially be a life-threatening infection. These antibiotics should be prescribed by your doctor. Antibiotics may be prescribed even if nasal splints have not been placed. Contact your doctor if you have been told or think you have splints in your nose but have not received antibiotics.

Nasal saline serves two purposes. It gently washes away all loose debris such as dried blood to keep the nose clean during the healing process, and it also accelerates healing by maintaining a moist environment in the nose. If you do have splints placed in your nose at the time of surgery, there may be no space inside your nose to spray the saline, so it is generally best to wait until your splints are removed before starting to use nasal saline.  However, you can try to use it, as the saline may decrease the amount of dried mucus and blood that collects in and on the splints, decreasing the blockage of breathing that this dried mucus and blood can cause.

A decongestant decreases the amount of swelling in the nose and can keep the nasal passages open during the healing phase. Because these sprays cannot be used for more than a few days without causes their own set of problems, we recommend that patients combine regular use at bedtime for two days with use as-needed to control any bleeding from the nose. If you do have splints placed in your nose at the time of surgery, it may be very difficult to have space in your nose to spray this medication, so it is generally best to wait until your splints are removed before starting to use this spray.

Walking after surgery is important. Patients should walk at least 3 times a day starting the day after surgery. Walking helps prevent blood clots from forming in your legs. Spending more time out of bed (walking or in a chair) than in bed is helpful because your lungs fill up with air, lowering the risk of fevers and pneumonia. Not walking enough is a major cause of fevers after surgery, so please do remember to walk at least 3 times every day. Patients should avoid strenuous activity for 4 weeks following surgery because that typically raises heart rate and blood pressure. For this reason, it can increase swelling or cause bleeding to start.

Dr. Kezirian likes to see his patients 1-2 weeks after surgery. If a postoperative appointment has not been scheduled, please contact the office at 323-442-5790 to schedule this when you return home after your surgery.