The 19th annual Advances in Diagnosis and Treatment of Sleep Apnea and Snoring course is being held in Orlando, Florida from February 15-17.  Although I am one of the Co-Directors, full credit for its excellent combination of medical and surgical topics goes to the two other co-directors who started the course before I joined them a few years ago: Drs. Andrew Goldberg (University of California, San Francisco) and Richard Schwab (University of Pennsylvania).  In addition to their own intriguing lectures, Drs. Goldberg and Schwab deserve credit for bringing together healthcare providers from a wide range of disciplines with the course format.  I will be presenting highlights and new insights from various lectures over the next 3 days.

Dr. Atul Malhotra (now at UC San Diego but formerly from Harvard University and Brigham and Women’s Hospital) spoke about the causes of sleep apnea, describing the previous and ongoing work in his laboratory at Brigham and Women’s Hospital.  Specifically, they (and other researchers) have characterized the combination of factors that can play a role in the development of sleep apnea: abnormal anatomy of the head and neck, control (and loss) of muscle activity during sleep, low arousal threshold (increased chance of waking up easily), loop gain (control of breathing), and lung volume (more important with obesity).  This work is paving the way for understanding how subgroups of patients may respond particularly well to surgery or even various types of medications.  Although studies of medications have not shown good enough results, Atul points out that, like with surgery, this may be because researchers have not been able to identify patients that would specifically respond better to certain medications.  Atul’s lecture on consequences of sleep apnea later in the schedule highlighted one thing that patients (and physicians) often overlook: the importance of sleeping enough (7-7.5)  hours.  There is a growing number of studies showing how important adequate sleep time is, whether for cardiovascular health or body weight (losing or not gaining).  As Andy pointed out while sitting next to me, I always learn something from Atul’s lectures, even when I hear a lecture on the same topic twice.

Dr. Nalaka Gooneratne from the University of Pennsylvania spoke about 2 topics that are poorly understood in all fields of medicine, including sleep medicine: sleep apnea in older adults (over the age of 60 years) and complementary and alternative medicine.  Although sleep apnea is more common among older adults than young and middle-aged adults, relatively little research has focused on older adults.  I have been fortunate to work on two different studies of sleep apnea and daytime symptoms like sleepiness and fatigue.  These studies have shown that older adults can have sleep apnea and daytime symptoms but that the two are not always related.  Nalaka presented preliminary data showing that it was the older adults with sleep apnea AND daytime sleepiness that had increased risk of death over a period of 10-15 years, whereas those with sleep apnea or sleepiness (but not both) had no increased risk of death compared to the control group without either problem.  Nalaka also discussed how commonly patients are using complementary and alternative medicine to treat their sleep disturbances.  He reviewed the literature, showing that the evidence in support of melatonin to treat insomnia (5-10 mg) is fairly strong, reassuring because the risks of melatonin are relatively low.  He highlighted a key mistake that people make: melatonin works best when taken about 2 hours prior to bedtime.

Dr. Thorarinn Gislason from the University of Iceland also had 2 lecture addressing the epidemiology of sleep apnea around the world and the genetics of sleep apnea.  He discussed the differences in craniofacial structure among different populations that contribute to the relative importance of craniofacial (head and neck bony) structure vs. obesity as risk factors for sleep apnea.  He then discussed the landmark work being performed in Iceland about the genetics of sleep apnea; Iceland has excellent geneaological records for their relatively homogeneous population, which makes this work more straightforward, and I look forward to the results of their work being performed in collaboration with other premier centers around the world.

Drs. Samuel Kuna and Allan Pack discussed changes dramatically affecting the current and future practice of sleep medicine: home sleep testing, screening of sleep apnea in commercial truck drivers, in addition to their thoughts about the future.  Sam and Allan are true world leaders in this area, and their insights and updates were fascinating.  With financial pressures and changes brought on by health care reform, there has been a major push to home sleep testing and away from in-laboratory polysomnogram.  There are limited studies showing that this can be done well, particularly in selected groups of patients, but future research (whether in a formal study or simple data collection) must consider clinical outcomes like CPAP usage, blood pressure, and daytime symptoms such as sleepiness.  The latter part echoed Andy’s lecture on optimal outcome measures for evaluation and treatment of sleep apnea. 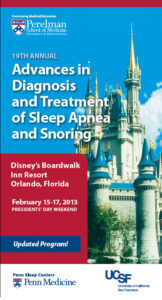