I have written previously about international research efforts, whether one showing the benefits of drug-induced sleep endoscopy or investigating cardiovascular benefits of sleep apnea treatment with INCOSACT.  Generally these collaborations bring together major centers from around the world to increase the numbers of study participants, but they can also examine research questions with a more-diverse population than is possible using participants from a single center or even a single country.  This month, a study published in the Journal of Clinical Sleep Medicine showed the value of bringing together centers from different countries (and continents).

Weight gain and increased body mass index are established as major risk factors for snoring and obstructive sleep apnea.  The recent study evaluated this across racial.ethnic groups using data from the Sleep Apnea Global Interdisciplinary Consortium (SAGIC).  The study showed that the severity of obstructive sleep apnea (measured by the apnea-hypopnea index, or AHI) was much more clearly associated with body mass index and the related measurement of neck circumference among Caucasians than for African-Americans, Asians, or South Americans.  The figure below shows that the blue curve (Caucasians) is much steeper and higher (greater AHI) in Caucasians than for the other groups, particularly with body mass index below 40.  It turns out that inidividuals with obstructive sleep apnea would more likely be candidates for treatments like surgery with a body mass index below 40 as well. 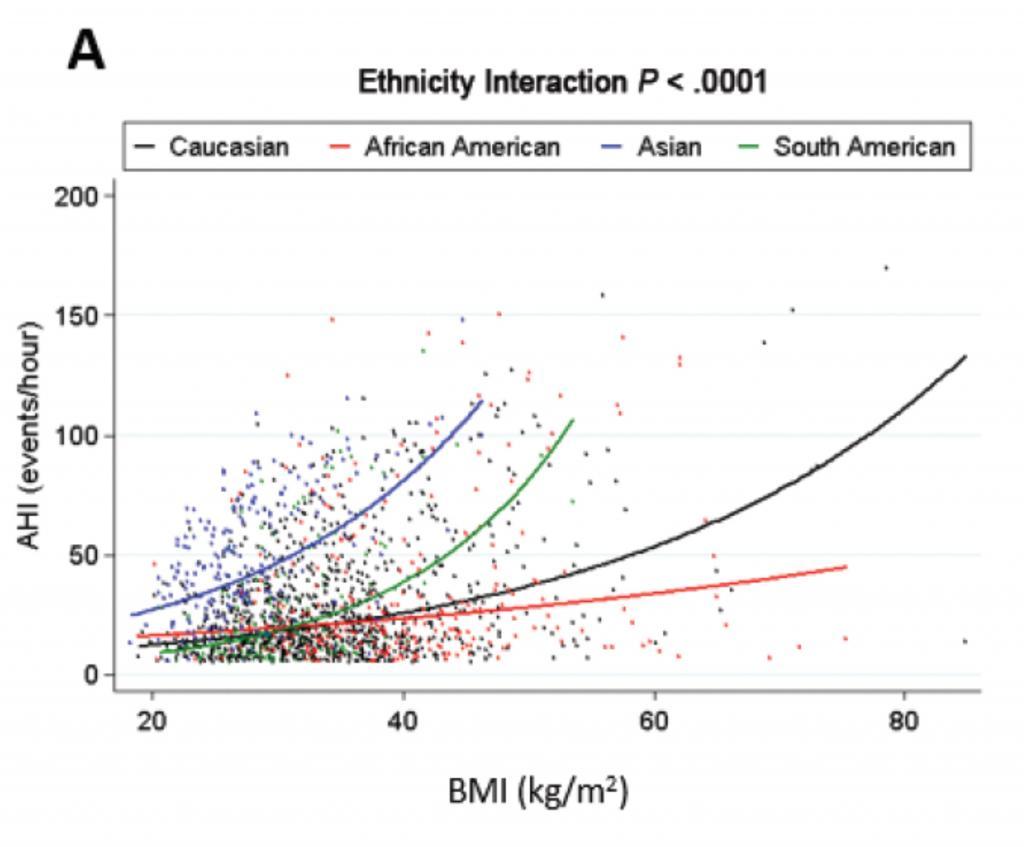 Body mass index is a crude measure of body weight that may not be so relevant to health and sleep apnea.  Because of this, previous studies have moved beyond this to look at distribution of body fat.  In a previous blog post from October 2014, I wrote about an important study showing that individuals with obstructive sleep apnea had more fat in the tongue itself than those with a similar body mass index without sleep apnea.  Because those who deposit fat in the tongue likely also fat more fat in other parts of the head and neck, neck circumference may be a better measure of head and neck soft tissue than body mass index.  The just-published study also examined the association between AHI and neck circumference and found no overall statistical differences in the association based on race/ethnicity. However, looking at the results for those with neck circumference below 45 cm, the association appears to be stronger among Caucasians, not just because the blue curve is higher on the graph than the other curves but because the upwards slope (the degree of association) is also greater. 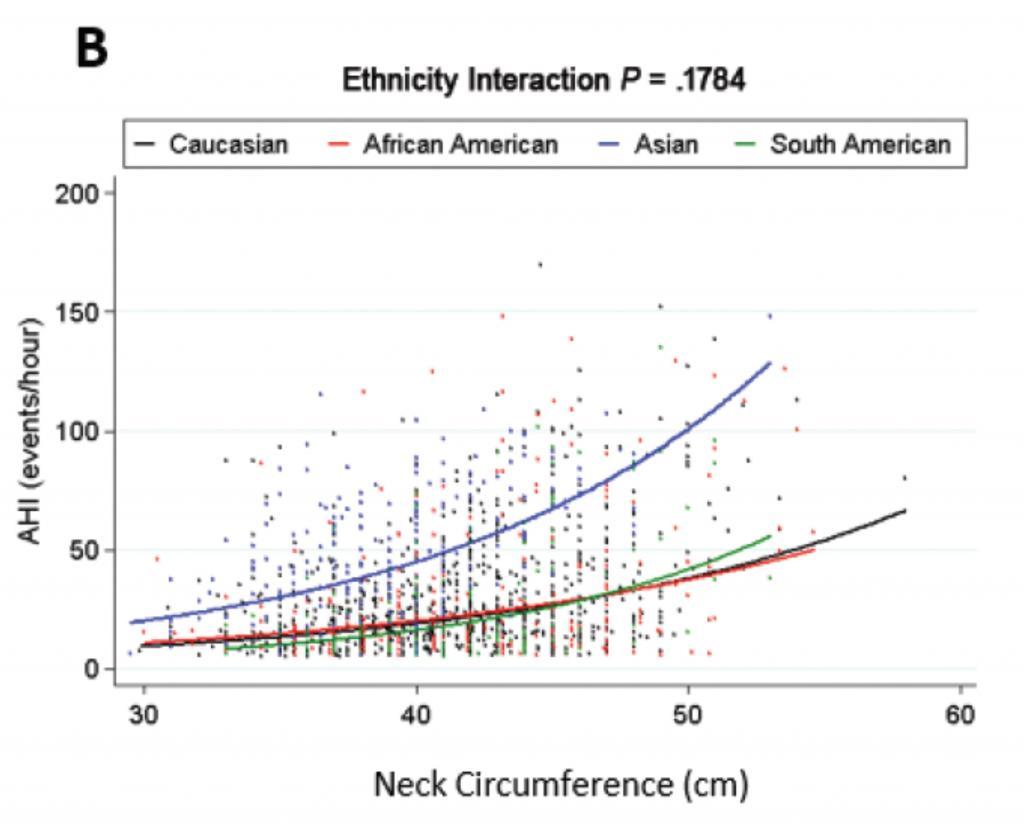 Overall, this study echoes the recurring theme seen with research across different racial and ethnic groups – in sleep apnea and all of medicine.  Although there has been substantial progress, medical research has generally focused on middle-aged, non-Hispanic Caucasian males.  Studies have shown that the findings seen in these non-Hispanic Caucasian males may differ in other groups, whether defined by race, ethnicity, or gender.  We need to understand these differences because obstructive sleep apnea cuts across all of these boundaries, actually being more common among many other racial and ethnic groups compared to non-Hispanic Caucasians.  My hope is that there are many more studies like this one that can provide insight into this disorder and the impact of treatment.