Drug-induced sleep endoscopy (DISE) is an evaluation technique that can be performed for patients with obstructive sleep apnea who are unable to tolerate positive airway pressure therapy (e.g., CPAP or BiPAP).  The purpose of DISE is to improve the results of treatment with surgery and/or oral appliances.  There are many surgical procedures available to treat the different structures of the nose and throat that can play important roles in causing snoring and obstructive sleep apnea. Successful sleep apnea surgery is based on accurately identifying where the snoring and blockage in breathing is occurring and developing targeted, effective treatment.  DISE was developed in Europe over 20 years ago, and it allows surgeons to look inside the throat with a flexible fiberoptic endoscope while a patient is sedated in a way that is similar to natural sleep.  Once a patient is sedated but breathing on their own, the surgeon places the endoscope through one of their nostrils and into the throat to examine what are called the Palate and Tongue Regions in the image below.  The idea behind DISE is that determining what causes blockage of breathing during sleep will allow surgeons to choose surgical procedures to treat each patient individually rather than just using 1 or 2 procedures for every patient.  As one of the world’s leaders in DISE and other evaluation techniques that are essential to selecting surgical procedures, my research has evaluated important characteristics of DISE as a medical test, compared it to other evaluations, showed the importance of experience with DISE, and examined surgical results. 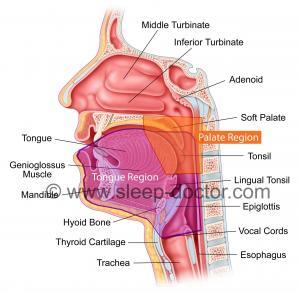 DISE is a somewhat-expensive test in the United States, as it is either performed in the operating room or a procedure suite.  In the current era of healthcare reform and the desire to be judicious with spending health care dollars, the questions are whether DISE alters the surgical treatment plan and improves outcomes.  A Spanish study published in the August 2014 issue of the medical journal The Laryngoscope addresses the first question.  A series of 162 patients underwent a combination of common evaluation techniques performed while patients are awake (basic physical examination, awake endoscopy, and a special X-ray called a lateral cephalogram) and then also DISE.  One surgeon developed a surgical treatment plan based on the awake evaluations, and another did so based on the DISE only.  The study showed that approximately 40% of patients would have had a different surgical plan based on DISE than they did with the awake evaluations.

The study may overestimate the value of DISE for some patients

When it comes to taking care of patients, this is not exactly what happens.  A surgeon will perform awake examinations and then ALSO perform DISE if they feel it is necessary and helpful.  It would have been more valuable to have determined the surgical plan before and then after DISE, comparing the two.  This is the approach taken by a German group who showed that 78% of patients had a change in treatment recommendation after undergoing DISE.  In both studies, many of the changes are related to changes in the open space in the throat after moving the lower jaw forward (Esmarch maneuver), simulating the effect of a mandibular repositioning appliance (also called a mandibular advancement device, one of the types of oral appliances).  In the United States, DISE is not a standard evaluation before a patient is treated with an oral appliance.  I am not suggesting that they should.  Again, DISE is expensive, so a better approach for patients who have a good chance of responding is simply to obtain one, as long as someone believes that they would be able to tolerate it and sleep comfortably while wearing it, every night.  There are a number of factors associated with better responses that have been identified in previous studies.  (On a side note, a number of dentists are having patients pay to perform all sorts of CT scans or other tests called acoustic pharyngometry based on sound waves before and after advancing their lower jaw.  These tests have never, ever been shown to be helpful in predicting whether someone would benefit from a mandibular repositioning appliance and are a waste of time and money–for patients and dentists.)

What do I do when it comes to DISE and sleep apnea surgery?

Although I have performed hundreds of DISE examinations, I am more conservative in its use than my European colleagues who feel the evaluation is a standard part of the workup of every patient with snoring or obstructive sleep apnea.  I believe that, by focusing in the surgical treatment of snoring and obstructive sleep apnea, I can make surgical treatment decisions without the need for a separate DISE.  I will perform DISE as a stand-alone evaluation (meaning that I do not perform surgery on the same day) in most of my patients, but I will perform DISE at the time of surgery for some patients because it can dictate the type of surgery.  For example, I feel that I can decide whether someone will need surgery on their soft palate and tonsils but may use DISE to determine whether I would want to perform the traditional type of palate surgery, expansion sphincter pharyngoplasty, or lateral pharyngoplasty.  Similarly, it can dictate how aggressive I need to be when perform lingual tonsillectomy or removing tissue from the back of the tongue.

The Spanish research team indicated that they will continue their work by examining whether DISE improves the results for surgical treatment.  There are some well-done studies showing that certain findings during DISE can be associated with better or worse outcomes after certain procedures, but a more-detailed assessment will only help surgeons improve the way they use DISE and work to achieve the best possible results for our patients.