Navigation: Home > Dr. Kezirian’s Blog > A reminder not to ignore surgical complications–and an unusual one after hyoid suspension

This month’s issue of the medical journal Otolaryngology–Head and Neck Surgery included an article written by Emmanuel Jauregui, one of our medical students at the University of California, San Francisco, that reported a case I treated with an unusual complication of hyoid suspension (sometimes called hyoid myotomy and suspension).

Hyoid suspension is a procedure that can be used to treat obstructive sleep apnea.  The hyoid bone is a relatively thin, horseshoe-shaped bone in the neck.  The hyoid bone in humans is unique in that it can move.  A mobile hyoid bone appears to have been one of the evolutionary changes important in the development of speech, but it likely also contributes to our risks for developing sleep apnea (which is not seen in most animals, except for some dogs).  The hyoid bone is important in sleep apnea because it has attachments to a number of other structures, including the epiglottis (through the hyoepiglottic ligament) and muscles that are next to or surround the throat (including the middle pharyngeal constrictor).  During sleep, muscles relax, and the hyoid bone is free to move towards the back of the throat, allowing the structures attached to it to fall into the throat and block breathing.  The hyoid suspension procedure involves pulling the hyoid bone forward and using stitches wrapped around the hyoid bone to secure it either in a slightly-downward direction to the top part of the Adam’s apple (thyroid cartilage) or upwards to the lower part of the lower jaw (mandible).  The image below has the technique I use, to the Adam’s apple. 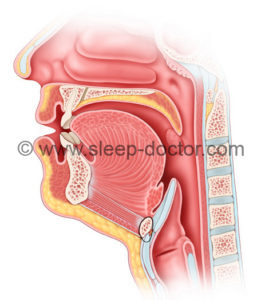 The case report discussed a woman who was referred to see me after undergoing the hyoid suspension using the technique with suspension upwards to the lower jaw.  She had done well after surgery, but 2 1/2 years later she developed pain, swelling, and drainage from the incision on her neck used for the procedure.  After not responding to multiple courses of oral and intravenous antibiotics, she had a CT scan that showed formation of new bone coming from her hyoid bone (the CT scan picture is Figure 1 of the article).  We went to the operating room, where we saw that this bone formation had occurred to encase the stitch that was wrapped around her hyoid bone.  She recovered uneventfully, and her symptoms also cleared up completely.   Emmanuel wrote up the case because this type of new bone formation (called heterotopic ossification) is rare in the head and neck and had never been reported after hyoid suspension.  The bone likely formed due to a combination of some trauma to the hyoid bone and chronic infection of the stitch material that did not clear up with antibiotics.  During hyoid suspension, stitches are passed around the hyoid bone.  Because the hyoid bone is next to the throat (see the figure above), the needle and stitch can pass into the throat, leaving a short length of the stitch sitting in the throat where it is exposed to the normal bacteria we all have there.  Because antibiotics are typically used for a few days after hyoid suspension, infection is rare because the lining of the throat will typically heal to cover any exposed stitch material.

The bottom line: do not ignore complications from any procedure

I have written a number of articles and book chapters about complications of sleep apnea surgery, and I have also served as a medical legal expert.  I joke that if you are an expert in surgical complications, hopefully you do not have too much experience from complications in your own patients.  The truth is that my understanding of complications comes from my own patients and those referred to see me, in addition to the research I have done in the area.  My sleep-doctor.com main site includes discussion of procedures and the long list of potential complications for a couple of reasons, including the need for patients to understand these complications but also to let patients know that I am aware of them and take steps to minimize the chance that they occur.

This case above (like another rare case that we published a couple of years ago) highlights the most important thing I stress to patients and surgeons: recognizing complications, discussing them with colleagues if necessary, and determining whether treatment is possible.  This patient’s surgeon, instead of ignoring her, had her undergo further evaluation and then sent her for additional treatment.  It turns out that one of my own patients had a similar infection (without the bone formation) after hyoid suspension.  He also did not respond completely to antibiotics, and I was not sure if removing the stitch would solve the problem.  I asked a number of colleagues about this, to no avail, but serendipitously I went to an International Surgical Sleep Society meeting and heard a lecture about hyoid suspension and potential complications from Nico de Vries, a Dutch expert in sleep surgery who is also a good friend.  I came home and scheduled the patient for removal of the one stitch (with the technique I use, there are four sutures, so it did not reverse the results), and the infection and drainage cleared up immediately.