This study and others are included in my video discussion of the Inspire Medical Systems Upper Airway Stimulation system that I have posted on Youtube.

One of the distinctive aspects of the Inspire Medical Systems STAR Trial was the short-term withdrawal of therapy from some patients.  The November 2014 issue of the medical journal Otolaryngology–Head and Neck Surgery reported results of this randomized withdrawal study.  This withdrawal study that took the first 46 patients who responded well to the Inspire Upper Airway Stimulation 12 months after receiving the system and stopped treatment for a month in half of them.  They then tested everyone a month later (with half of these patients having their system off for the month) and then turned the system back on in everyone and retested everyone a total of 18 months after receiving the system.

The study included the broad evaluation of patients, using sleep study results (such as the apnea-hypopnea index that measures the number of times per hour with blockage of breathing) and questionnaires to measure sleepiness and quality of life.  There were a couple of important findings.  The image below shows the results for the apnea-hypopnea index at baseline (before receiving the Upper Airway Stimulation system), at 12 months after system implantation, in the randomized withdrawal study period (RCT), and at 18 months after system implantation.  The height of each bar represents the apnea-hypopnea index at each point in time.  The dark bars show results for the Maintenance Group, who had the system left on the whole time, and the light bars are for the Withdrawal Group that had the system turned off for a month.

The Maintenance Group with the system left on maintained the benefits, whether in the apnea-hypopnea index (shown below) or other important measures such as sleepiness and quality of life.  However, the Withdrawal Group with the system turned off for a month lost the benefits when the system was turned off and then regained them when the system was turned back on.  As I mention in my Youtube video, this on/off patterns is the most important evidence showing that the benefits that these patients experienced is directly due to Upper Airway Stimulation.

If you have any questions or would like to refer patients or see me for an appointment, please do not hesitate to contact me at [email protected] 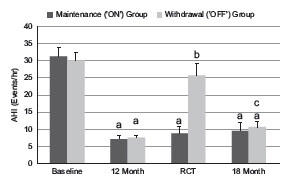