Our snoring and sleep apnea course continued today with talks on a wide range of sleep apnea treatment, especially weight loss and surgical evaluation and treatment.

Allan Pack, MBChB, PhD from the University of Pennsylvania started the day, speaking on key papers from the past year in the field of sleep medicine.  The prevailing wisdom has been that the development of electricity and artificial light has led to a decline in the amount of time that people are sleeping.  Two studies have examined human populations who have not had access to electricity and showed that, in fact, this does not appear to be true.  The typical range of sleep varies in these groups between 5.7-7.1 hours per night, with slightly more sleep during the winter than the summer.  Sleep generally started around 3.3 hours after sunset, and people awakened as ambient temperature reached its lowest point during the day.  Other papers reviewed the evidence related to sleep apnea and risks of cancer and kidney disease.  They showed that sleep apnea, especially the degree of drops in oxygen levels, increased the development of a number of different types of cancer that have been studied, the mortality due to cancer, and the risk of advanced kidney disease.

Weight gain and obesity are major risk factors for snoring and obstructive sleep apnea.  We have been fortunate to have, for many years, lectures from Gary Foster, PhD, the current Chief Scientific Officer of Weight Watchers and a Voluntary Professor at Temple University who has led major research studies on weight loss.  The past couple of years have seen a number of published studies in this area, and he made the following points:

Andy Goldberg, MD, MSCE spoke about the bacteria we all have in our intestinal tract and the fascinating work that has been done (including by his team) related to the bacteria in our sinuses.  Studies have shown that there are 3 different main types (called enterotypes) of bacterial combinations that people around the world have in their intestinal tract, with the type largely determined by age 3.  Bacteria there serve various functions: break down food to start metabolism process, protect a person from invasion by organisms or other materials in the intestinal tract, and modulation of immune system response.  Antibiotics can alter the pattern of bacteria in the intestinal tract, creating a potential complication called clostridium-dificile-associated diarrhea.  Crazily enough, this has been treated with transplant of fecal bacteria from another person (yes, you read that correctly), with a study stopped early because the results showed such a clear benefit.  To continue the story about the importance of these bacteria, it turns out that children born through Caesarean section have a higher rate of obesity and different intestinal tract bacteria than children born with a vaginal delivery, with similarities in intestinal tract bacteria between those born through Caesarean section and obese individuals born through vaginal delivery.  We are not at the point of performing fecal transplants for obesity, but work has been done with mice exploring this, with encouraging results.

The sugar pandemic: can taxes be a sleep apnea treatment?

As a parent, I am selfishly always looking for lifestyle behaviors to pass along to my child, not to mention my patients.  I was fortunate to be raised with only rare consumption of sugary drinks, a pattern that I have continued to this day.  Kirsten Bibbins-Domingo, MD, PhD spoke about the worldwide sugar pandemic.  Sugar consumption is clearly linked to obesity, diabetes, cardiovascular disease, and mortality.  Luckily, we have seen a decline in the consumption of sugary beverages by children over the past 5 years, but there have also efforts to introduce public health measures to reduce consumption.  These have included taxes and laws related to portion control.  In the US, Berkeley (California) is the largest city with an added sugar tax, and Mexico is the largest country with an added sugar tax.  Mexico actually had the highest rate of added sugar consumption, and the sugar excise tax successfully reduced sugary beverage consumption (with thorough statistical testing to show that the benefit was related to the tax and not other factors).  It is not surprising that sugary beverage manufacturers have aggressively fought similar efforts to introduce taxes in the US, and I hope that these taxes gain momentum.  The goal is not to prevent people from drinking sugary beverages but rather to have the prices of these beverages reflect the full impact of doing this, similar to tobacco taxes.

Speaking of parent concerns, Anna Meyer, MD from the University of California, San Francisco spoke about sleep disordered breathing (including obstructive sleep apnea) in children.  While I do not treat young children, I understand how challenging it can be to make decisions about potential surgery for a child.  There are a number of unresolved questions in children with sleep disordered breathing.  One is the decision about whether to order sleep studies before surgery, and the general consensus is that it should be done (1) if it is not clear whether a child has significant sleep disordered breathing just based on parental reports or (2) if the patient would be at higher potential risk of complications, for example if there are medical concerns related to the heart or lungs or a syndrome such as Down Syndrome.  Others are the use of acetaminophen with codeine (no better for pain relief than acetaminophen alone; codeine also has potential risks); steroids (single preoperative dose); antibiotics (no benefit to antibiotics in children undergoing tonsillectomy); and what to do with residual sleep apnea after tonsillectomy with or without adenoidectomy (tailored approaches are best).  Stacey Quo, DDS is an orthodontist in private practice on the clinical faculty at UCSF and Stanford who has done fantastic work with maxillary and mandibular expansion in children.  She shared her experiences and the literature, showing how it can be a valuable treatment for children with sleep apnea.

The second half of the day covered a number of topics familiar to readers of this blog.  This year I spoke about drug-induced sleep endoscopy and its role in selection of sleep apnea procedures, Tongue Region surgery for sleep apnea, and Inspire Upper Airway Stimulation.  Richard Schwab, MD spoke about his work using magnetic resonance imaging (MRI).  Sampeter Odera, DMD, MD from UCSF discussed maxillomandibular advancement and the recent review showing that this procedure has a 84% of achieving notable improvement in sleep apnea, although this is for patients who have already undergone previous procedures.  Robson Capasso, MD from Stanford discussed new options for treatment of snoring and sleep apnea.  Allan Pack returned to discuss the future of the field of sleep medicine, including the need to utilize telemedicine more fully to meet the needs of our patients with sleep apnea.  The day concluded with a panel discussion examining the future and the integration of multiple disciplines within medicine to provide the greatest benefit for our patients.

It was a pleasure to catch up with long-time friends and share ideas with colleagues, including both speakers and the attendees.  I look forward to the course next year! 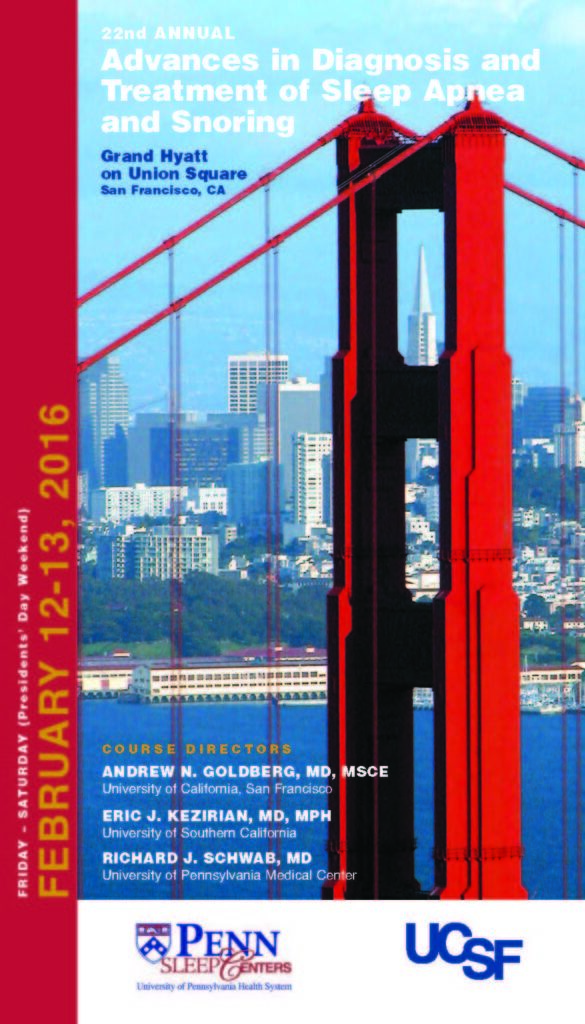 One thought on “Our snoring and sleep apnea course: Day 2 highlights”