Readers of this blog should be familiar with my sleep surgery philosophy: individual patients require an individualized approach to selecting procedures and identifying factors that will be associated with results.  Among the predictors of outcomes for palate surgery that have been identified, one of the most important is tonsil size.  Because patients who undergo palate surgery usually have tonsils removed if they have not had tonsillectomy already, any patient with enlarged tonsils will immediately have improvement in their throat because these tonsils can no longer block the passageway for breathing.

Although we often see patients who have already undergone tonsillectomy or whose tonsils are small, and many of them appear to have blockage in breathing that is limited to the area behind the palate, in what I call the Palate Region on my website.  Isolated Palate Region obstruction seems to be more common in Asian patients with obstructive sleep apnea, likely related to facial structure.  (Note: obstructive sleep apnea is more common among Asian patients, even in those who are not overweight or obese, in those with the stereotypical Asian facial structure of a wider face without as much projection of the jaws forward.) For patients with isolated Palate Region obstruction, a number of palate procedures have been developed, including uvulopalatopharyngoplasty, expansion sphincter pharyngoplasty, lateral pharyngoplasty, and palatal advancement pharyngoplasty.  While many studies have examined results for these procedures, none has focused solely on those patients with small or absent tonsils.

The August 2013 issue of the medical journal Otolaryngology–Head and Neck Surgery included a study from Jingying Ye and colleagues from the Beijing Tongren Hospital of the Capital Medical University in Beijing.  Adults with obstructive sleep apnea with small or absent tonsils (no larger than 2+ on the classic Brodsky classification, for those physician readers) underwent a combination of two palate procedures: a conservative uvulopalatopharyngoplasty (see before and after illustrations below) and palatal advancement pharyngoplasty.  These procedures provide a combination of soft palate (the soft part of the roof of the mouth) tissue removal and repositioning as well as removal of the back of the hard palate (the hard part of the roof of the mouth) to pull the soft palate forward.  The goal of the surgery, like all sleep apnea surgery is to improve the space for breathing. 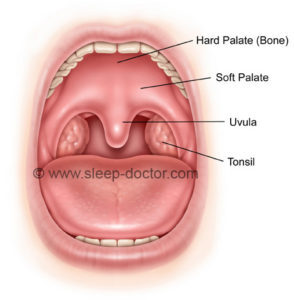 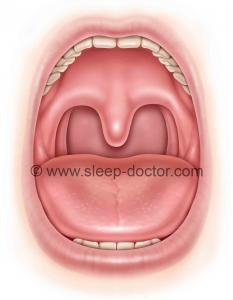 What They Showed: Surgery Must Open the Airway

All study participants underwent sleep studies before and at least 4 months after surgery.  On average, the patients improved dramatically, going from an apnea-hypopnea index (number of times with blockage in breathing per hour) of 57 to 16.  Not everyone had that same result, as a little over 50% had what is commonly called a notable response to surgery.  Importantly, they also performed CT (also called CAT) scans of the neck before and after surgery.  The important finding of this study was the detail with which they examined patients before and after surgery.  They found that, among a number of different measurements that they made from the CT scans and from patients, the most important was the change in the narrowest part of the breathing space behind the palate.  For those who responded to surgery, the space increased in size by 23%, whereas in the non-responders it actually narrowed.  It turned out to be more important than many other measurements such as the total space behind the upper and lower jaws, the change in soft tissue volume (including tonsils), the length of the throat, and body weight (adjusted for height by using the body mass index).

What Does This Mean For You?

This paper reinforces two things.  First, not everyone should expect the same results after sleep apnea surgery, even when they undergo the same procedure.  Factors related to the patient before surgery, the surgeon and the performance of the surgery, and healing (it is odd that some patients had a narrowing of their airway) are important.  Second, the key to sleep surgery remains the selection of the procedures (and their proper performance) that are most able to open the space for breathing and keep it open during sleep.  It was encouraging to see this paper a few months ago as the journal’s Associate Editor for Sleep Medicine and Surgery.  We need more studies like this.  It is critical that surgeons utilize this study and others to counsel patients and to have an array of procedures that they can perform to treat the diversity of patients that we see.

One thought on “Palate surgery with small or absent tonsils: new research and a key to good results”