The idea of removing tongue tissue as a surgical procedure to treat obstructive sleep apnea dates back to Shiro Fujita, MD and a 1991 publication.  Multiple technologies have been used to perform lingual tonsillectomy and midline glossectomy procedures,.  The challenge has been finding a technology that allows the procedure to be performed well without making the recovery too difficult for a patient.

Claudio Vicini, MD and his team in Forli, Italy pioneered the use of transoral robotic surgery-assisted to remove tissue from the back of the tongue with a 2010 publication.  Their work was performed with the da Vinci platform from Intuitive Surgical.  Since that time, they have refined their technique and performed high-quality research.  They are gifted surgeons.  I have traveled to observe them and learned much from their team; I have written about what I have learned from them about the expansion sphincter pharyngoplasty procedure.  Research from the team in Forli, including Drs. Vicini and Filippo Montevecchi, has advanced our understanding of sleep apnea surgery and improved results for so many patients. 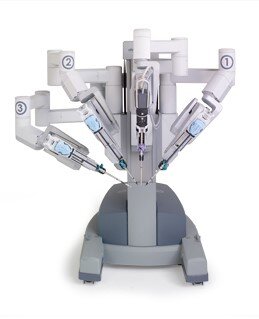 Based on the Italian work, a number of centers in the United States adopted this technology and approach starting in 2010.  At the American Academy of Otolaryngology Head and Neck Surgery 2019 Annual Meeting earlier this week, Jee-Hong Kim, MD (one of our residents) presented results of our team’s research examining the experience in the United States with procedures that remove tongue tissue for obstructive sleep apnea, comparing those procedures performed with and without the use of transoral robotic surgery.  The Nationwide Inpatient Sample is a database developed by the Agency for Healthcare Research and Quality specifically for research on national practices and experiences.  We used this data to examine the United States trends in the use of transoral robotic surgery and whether there were any clear patterns related to length of hospital stay and complications, comparing the use of transoral robotic-assisted surgery to other approaches.

What did the research on transoral robotic-assisted surgery for sleep apnea show?

We shared our findings, but I want to be clear that the findings have not undergone the important peer review process, where it is important that colleagues evaluate carefully our work and propose changes in the analyses that may change the findings.  However, I will share them here and promise to update this post as needed.

These procedures that remove tongue tissue can have a more-difficult recovery, so we looked at how often patients stayed in the hospital at least 3 days.  This was more common with the use of transoral robotic surgery (33%) compared to other technologies (25%).  For complications, transoral robotic-assisted surgery had a higher likelihood (8% vs. 6%) of lung-related complications like remaining on the ventilator after surgery for at least 48 hours or developing pneumonia.  There was no association when we looked at the rates of bleeding after surgery (0.5%) or overall complications (9%).  It is important to note that the database does not have any information on results, making it impossible to tell whether there was a benefit to some of the higher risks.

What does this mean for my patients?

Overall, I was very interested in the use of transoral robotic-assisted surgery when Claudio and his team first presented their work.  As I mentioned, I traveled to Forli to observe their surgeries because of this pioneering work.  I consider the team in Forli to be good friends and trusted colleagues and do not want this to be considered a criticism of their work or of my colleagues who use transoral robotic surgery for obstructive sleep apnea.

It is important to point out that surgeons use technologies as tools.  While a technology has specific features, a surgeon needs to understand these and use the technology properly.  Tools do not perform surgeries themselves (even when the term “robotic” implies that the technology performs the surgery on its own.

Every technology has advantages and disadvantages, and I personally have never felt that the advantages of transoral robotic surgery for these sleep apnea tongue procedures outweighed the disadvantages.  The important advantage of transoral robotic surgery is that the robot allows a surgeon to see inside the mouth in more detail compared to other approaches.  I think that detail is most important for cancer procedures where you need to see a tumor in detail and make cuts around the tumor, doing everything possible to make sure you are removing the cancer entirely.  In sleep apnea surgery, being able to see fine detail is not as important for me.

There are some disadvantages of transoral robotic surgery.  A surgeon does not actually feel the tissue because the surgeon is just guiding robotic arms that do not provide what is called haptic feedback.  In addition, the robotic arms can cut more deeply into the tongue than the Smith+Nephew Coblation technology that I use; cutting more deeply is better for removing tissue, but I feel it can have greater risks.  Then there is the cost issue, as robotic surgery is generally more expensive, not to mention the costs of a longer hospital stay.

Limitations of our research and next steps

I mentioned before that there was no information on whether different approaches had different improvements in sleep apnea, and this would obviously go into the discussion of whether one approach was better than another.  Intuitive Surgical has also made important advances in their technology that would have been used in 2010-14, although I believe that my concerns about disadvantages are still valid.  There are other companies that have developed transoral surgery technologies, including Medrobotics, and these have some similarities and differences.

The next step in our research is to look at risk factors associated with complications, as this is what matters more when we as physicians are caring for individual patients.  Understanding who may be at greater risk of complications with one technology or another is the only way we can improve care of our patients, so I look forward to sharing those results with the sleep surgery community and with you all.

Note: this post discusses FDA-approved technologies that are not specifically approved for use in surgery for obstructive sleep apnea.  If it seems outrageous for physicians to use devices or medications for indications that are not FDA-approved, I will just say that this occurs in all areas of medicine because the FDA process is, first and foremost, based on patient safety.  Because of the expensive and potentially-cumbersome FDA-approval process, physicians often will demand that something is safe (and require FDA approval, in general) but will rely on knowledge about a disease and what often are multiple published studies showing benefit in treating another diagnosis without absolutely requiring that there be FDA approval for the precise diagnosis that they are treating.