The external nose (the part you can see easily on the outside) can also play an important role in nasal obstruction. The nostrils and area directly above them form what is called the nasal valve (see illustration below). This area is somewhat prone to collapse but can be particularly narrowed or easily collapsible due to a number of reasons, including congenital (at birth) factors or previous trauma or surgery. Rhinoplasty and nasal valve surgery are commonly used to treat nasal obstruction that originates at the external nose.

Rhinoplasty procedures are highly individualized, so your doctor should discuss the nature of the procedure as well as the risks and postoperative instructions.

What is nasal valve surgery?

In addition to the potential for bruising and a minor risk of infection, the major risk associated with the procedure is a slightly wider or fuller appearance to the middle portion of the nose. Although the general appearance of the nose is primarily related to the nasal tip and the shadows at the tip (not affected by this procedure), there will a change in appearance. Because the cartilage graft is typically only 2-3 mm thick, this change in appearance may or may not be noticed by others. Other risks and postoperative instructions are outlined in the Septoplasty page.

How is nasal valve surgery using VivAer or Latera performed?

VivAer and Latera allow a surgeon to treat nasal valve collapse without the use of cartilage and with little to no change in the outside appearance of the nose. The VivAer technology uses a controlled cauterization of the sidewalls of the nose, resulting in limited scarring (not involving the skin) that stiffens the sides of the nose. The procedure can be performed in the office or the operating room.  There is an animation showing the VivAer procedure on the Aerin Medical company website.  Because the VivAer procedure results in small raw areas inside the nose, it is recommended that patients avoid pinching their nose or placing anything inside the nose other than some saline spray or gel for 3 weeks.  If patients need to blow their nose, they should do so gently. They should also avoid strenuous activity for two weeks. 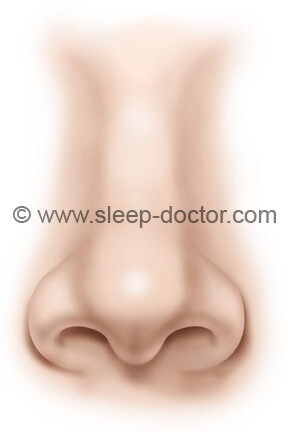 Frontal view of the external nose

Frontal view of the external nose, showing bone and cartilage

The following video presents a discussion of nasal procedures, including rhinoplasty and nasal valve surgery: