Sinus surgery can be an important part of treatment for repeated or chronic sinus infections (sinusitis) as well as trouble breathing through the nose.  Sinuses are effectively spaces in the head. They serve many purposes, but nobody is sure exactly why we have them. There are four pairs of sinuses. The picture below shows the maxillary sinuses behind your cheekbones, the frontal sinuses in your forehead, and the ethmoid sinuses that form a honeycomb-type structure in the area between your eyes. In addition, there are sphenoid sinuses towards the back of your nose, almost between your ears. Sinuses are connected to your nose through narrow passageways, and the lining (mucosa) of the sinuses and these passageways is very similar to the lining of the nose. The mucus made by the lining of the sinuses normally drains into the nose. However, when the lining of your nose is swollen, including swelling related to allergies or colds, these passageways can close off, trapping mucus inside your sinuses and leaving it open to infection with the bacteria (and possibly fungus) in our noses.

Short-term sinus infections (acute sinusitis) are common, as they can be caused by colds or viruses. Typically they respond well to combinations of nasal sprays and, possibly, antibiotics. Sinus surgery is reserved for those who have many short-term infections or have infections that last a long-time (chronic sinusitis), without good control with medications alone.

What is sinus surgery?

Sinus surgery is generally performed using small telescopes to look into the nose through the nostrils, and it may be combined with other nasal procedures such as septoplasty. Sinus surgery involves removal of small pieces of bone and lining (as well as any abnormalities like polyps) to widen the passageways connecting the sinuses to the nose. By widening these passageways, the goal of sinus surgery is to reduce the number and severity of sinus infections while also making them easier to treat. The sinuses are next to important structures like the eyes and brain, so sinus surgery will involve obtaining a CT scan of the sinuses beforehand to help in making decisions about the extent of sinus surgery and to minimize risks to these important structures. 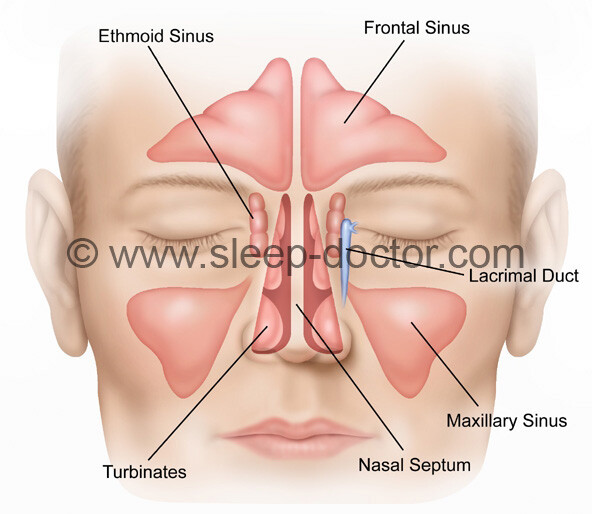 Frontal view of the face, showing the sinuses

The following video presents a discussion of nasal procedures, including sinus surgery:

All patients undergoing sinus surgery have a CT scan of the sinuses prior to surgery. This CT scan serves many purposes, including helping to determine which sinuses should be treated during sinus surgery. They also help reduce the risk of complications from sinus surgery because they reveal the bony structure inside the nose and sinuses. This is critical to preventing complications, as Dr. Kezirian can anticipate what he should be seeing during surgery and understand the anatomy of the bony separation between the sinuses and important nearby structures like the eyes and brain.

The nose and sinuses have an excellent blood supply, and this places patients at risk for bleeding following sinus surgery. While many steps are taken to minimize the risk of bleeding, there is a chance that it can occur. A major factor in preventing serious bleeding is to avoid the use of aspirin, NSAIDs (such as ibuprofen, Advil®, Motrin®, naproxen, or Aleve®), vitamin supplements, or herbal medications for at least two weeks before and after surgery. Minor bleeding should be expected, but the amount of bleeding can potentially be significant or life-threatening.

Because the sinuses are next to the eyes, it is possible to have changes in vision due to swelling or damage of the muscles that move the eye or the nerve for vision. Changes in vision can include double vision because the eye muscles are not moving the eyes together or loss of vision (including possible blindness) if the nerve is damaged. It is not unusual to have some swelling of the eye muscles, resulting in temporary double vision that clears up within 2-3 days following the procedure. HOWEVER, CONTACT DR. KEZIRIAN IMMEDIATELY IF YOU DEVELOP ANY CHANGE IN VISION OR EYE PAIN FOLLOWING SINUS SURGERY.

Brain injury is rare after sinus surgery, but it is possible because many of the sinuses are next to the brain.

Change in the senses of smell and/or taste.

Any surgery inside the nose can occasionally cause alterations in the sense of smell. Because smell plays an important role in taste, the sense of taste can also be affected. This used to be more common with older techniques of sinus surgery that involved routine removal of a structure in the nose called the middle turbinate; since we have now learned that the lining covering this structure is often involved in the sense of smell (and therefore taste), this is not done commonly. Your sense of smell may return, although changes can be permanent.

The tear duct (lacrimal duct) drains tears from the corners of the eye next to the bridge of the nose into the nose itself, as shown on the figure above. This duct is probably damaged more than we think in sinus surgery, but it only creates problems if it is damaged and then scars in a way that blocks the tear duct. A blocked tear duct will not allow tears to pass from the eye into the nose, and tears will leak out the corner of the eye. This can be addressed with a procedure to reopen the tear duct, although the problem could be permanent if the procedure is not successful.

These problems are usually temporary, but they may be permanent. Rarely they can be associated with problems called empty nose syndrome or atrophic rhinitis, when patients feel trouble breathing through their nose as well as having dryness and crusting.

As described above, the goal of sinus surgery is to reduce the number and severity of sinus infections while also making them easier to treat. Often this improves or eliminates symptoms, but it may not. Another procedure—either performed on the sinuses or on another area—may be necessary to provide the desired relief.

Your pain may be significant for the first 7-10 days following surgery, but it should improve markedly by 10 days. We want to control your pain to make you comfortable during your recovery. Some people try to “hang in there” or suffer without taking pain medications. Controlling your pain is important for breathing and healing, so please take your pain medication when you have pain after surgery. Try not to let the pain increase until it becomes intolerable before you take the medication. If you prefer to avoid narcotics, you should feel free to use acetaminophen (Tylenol®). Avoid aspirin, NSAIDs (such as ibuprofen, Advil®, Motrin®, naproxen, or Aleve®), vitamin supplements, or herbal medications for at least two weeks because they can increase your risk of bleeding after surgery.

Two things that may reduce the swelling (the underlying cause of the pain) are to sleep with your head elevated (on 3 pillows) for the first 3 days following the procedure and to use ice or something like frozen peas in a bag placed over the bony part (highest area of the nose) of the bridge of your nose. Be careful not to put pressure on the rest of the bridge of your nose if you have also had septoplasty performed, as that will not only be painful but can disrupt the healing process and/or move your septum to one side or the other of the nose.

Dr. Kezirian will direct you when to start rinsing your nose with nasal saline (typically with the NeilMed Sinus Rinse® system). Usually, this is started 2 days after sinus surgery. If nasal splints are also placed in the nose (often done if septoplasty is also performed), irrigations will start once the splints are removed, typically 1 week after surgery. Nasal saline irrigations are very important because they flush out dried blood, dissolvable packing, and mucus. Irrigations help the healing process and decrease the chance of a postoperative infection, which is a major cause of poor healing and a need for additional sinus surgery. If the irrigations cause substantial bleeding or pain, let Dr. Kezirian know right away.

Antibiotics and steroids (such as prednisone)

You may be prescribed antibiotics and/or steroids (such as prednisone), possibly starting before sinus surgery. Please take them as directed. If you are having problems with taking them (such as diarrhea or trouble sleeping), stop them but also let Dr. Kezirian know right away.

It is normal to have mild bleeding for the first 1-3 days after surgery. You will be given gauze pads to place under your nose, and you can change them as needed. You can take some steps to decrease bleeding. Keeping your head elevated as much as possible (including sleeping on 3 pillows or in a chair for the first few days after surgery) is one way to reduce bleeding. If you have notable bleeding, you can use Afrin® nasal spray (2 sprays each nostril every 4 hours, no more than 3 times).

Walking after surgery is important. Patients should walk at least 3 times a day starting the day after surgery. Walking helps prevent blood clots from forming in your legs. Spending more time out of bed (walking or in a chair) than in bed is helpful because your lungs fill up with air, lowering the risk of fevers and pneumonia. Not walking enough is a major cause of fevers after surgery, so please do remember to walk at least 3 times every day. Patients should avoid strenuous activity for 4 weeks following surgery because that typically raises heart rate and blood pressure. For this reason, it can increase swelling or cause bleeding to start.

Dr. Kezirian likes to see his patients 1-2 weeks after surgery. If a postoperative appointment has not been scheduled, please contact the office at 323-442-5790 to schedule this when you return home after your surgery.